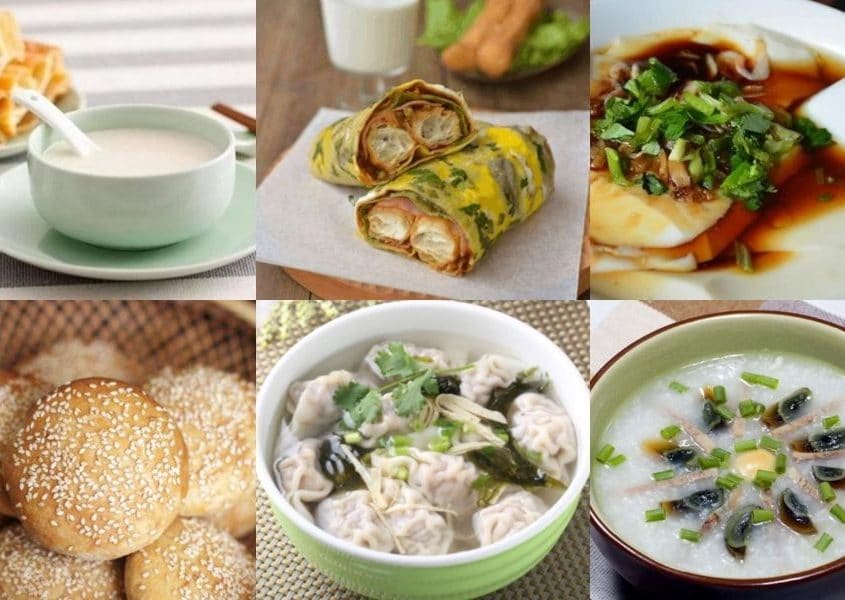 Chinese donut eaten with sweet soy milk served in a bowl, a bit like croissant eaten with coffee in France.

Translated simply as Chinese crepe and sometimes affectionately called jianbing, it’s basically a Chinese donut or cracker wrap. Watch a video of jianbing being made.

Often called wonton in English (derived from Cantonese), it is practically a wrapped meat dumpling cooked by steaming or boiling. The shape of wonton is often thought to resemble ancient gold coins and thus traditionally eaten on the second day of the Chinese New Year to attract abundance for the year.

Called congee, it is simply a rice porridge. A plain congee uses only rice and water that are slowly cooked. There are many varieties of congee. A popular type of congee is century egg and pork congee (皮蛋瘦肉粥 pídàn shòuròu zhōu), usually available at yumcha restaurants. Please note that century eggs are just preserved eggs that change color into greyish-black due to the process of preservation that takes several weeks.

For working adults, lunch can be eaten at a food hall with colleagues. Rice or noodle is the main staple, combined with several dishes, typically served on an individual food tray. Lunch is eaten between 12pm to 1pm. Some people take a little nap after lunch.

Dinner is usually eaten together with family at home, with rice or noodle as the main staple, eaten with a variety of dishes (soup, meat and vegetables). Dishes are shared on the table and diner puts the dishes that they want into their rice bowl with a chopstick. Because the dishes are shared, some families have a rotating tray on the dinner table to make it easier for people to get the dishes. Dinner is eaten between 7pm to 8pm.

Some examples of the food eaten for lunch or dinner:

Noodle with minced pork cooked in zhajiang or soybean sauce.

Some regards jiaozi or dumplings as a national food because it is a dish that many people eat regularly, and it is eaten on special occasions such as during the Spring Festival and the Winter Solstice Festival. Like wonton, the shape of jiaozi also resembles ancient gold coins. For working adults, jiaozi is a convenient meal option. Frozen ones are available in supermarkets, fresh ones can be bought from shops.

Known as moo shu pork in Chinese, this stir-fry Northern cuisine includes pork, egg and daylily as its main ingredients, sometimes other ingredients are also added, such as cloud ear fungus and cucumber.

This is a dish that includes gnocchi like ingredient, mixed with spinach, pea, carrot, five-spiced pork, and seasonings. This dish was invented in Beijing back in 1912 by a family restaurant. One day, the restaurant had excess noodles; in order not to waste the noodles that would otherwise go bad soon, the family molded the noodles into gnocchi and added other ingredients as a stir-fry. Finding it tasted not bad, they started selling the dish to their customers.

Minced snail and pork stuffed in the shell, a traditional Shanghainese dish. 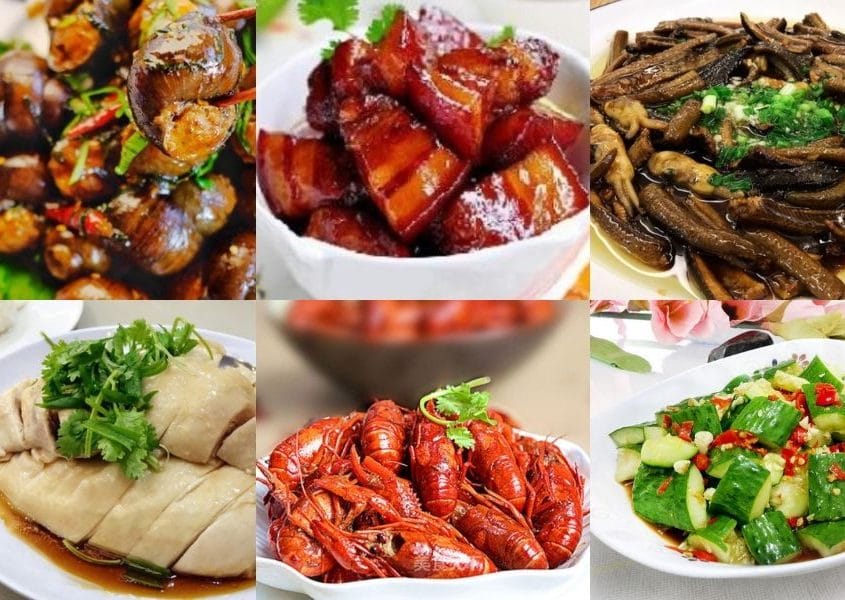 Supper is quite common. It takes place between 10pm to 1am, often accompanied with a glass of beer. Some snacks for supper include:

Barbequed beef or lamb on a skewer.

Since rice is often the main staple for lunch and dinner, the word for eating in Chinese is 吃饭 chīfàn, literally meaning “to eat rice”.  It is common to ask one another 你吃饭了吗？nǐ chīfàn le ma? as a form of greeting in Chinese. When you finish your meal, you can say 我吃饱了 wǒ chī bǎo le (I’m finished or I’m full).