One very important concept of Korean traditional value is respect for elders, called gong-gyeong (공경) in Korean. Gong-gyeong is often expressed as filial piety or hyo (효) and it has been one of the important values in Korea for a long time and has been deeply rooted in Korean culture due to Confucianism. Korean parents teach their children how to respect elders or anyone older than them at an early age. Let us take a look at how gong-gyeong is expressed in daily situations, such as during a family dinner, gifting, speaking and ancestral memorial ceremony.

When visiting a house where seniors are present, you should prepare some gifts, such as yokan (양갱, sweet jelly of red beans), red ginseng tea, Korean traditional snack or seasonal fruits.

Korean language contains honorific speech that should be used when speaking to seniors. When talking to seniors, do not look directly into their eyes, instead you should set your gaze at their chest level. Your posture should be straight, do not slouch.

Koreans reconfirm the relationship between ancestors and descendants through ancestral memorial ceremony (차례 charye) on special days like Seollal (Korean New Year’s Day) and Chuseok (Korean Thanksgiving Day). This is to show appreciation and respect for ancestors. Koreans believe that when their parents die, their spirits do not leave immediately but stay with their descendants and look after them sincerely. So people express their appreciation for ancestors through formalized ritual form and procedures.

2. Many kinds of meats and fish should be placed in the center.

3. An ancestral tablet is placed in front of a folding screen along with all the dishes and drinks. In the past, the tablet was made of wood and called Shinju. The ancestor’s name is written in black ink on the tablet.

4. And a folding screen placed behind the offering table. 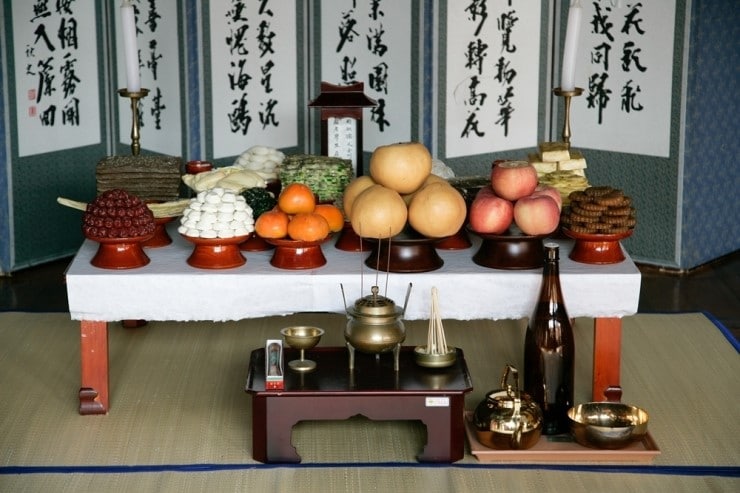 1. Traditionally, only male members of the family could participate in the ritual because ancient Korea was a patriarchal society.

2. At the beginning of the sacrifice, the eldest male in the family kneels down in front of the table to light the incense.

3. The patriarch stands up and bows twice and then pours three cups of traditional liquor in a bowl. Every male of the family repeats the bowing ritual.

4. The patriarch then places the spoon in the rice bowl and the men leave the room so that their ancestors can eat in peace.

5. After a few minutes. the men return and bow again three times to finish the ritual.

6. After the sacrifice, the food is then served to all the family members, including the women.