Survival Japanese: How to Travel by Train in Japan

Visiting another country without knowledge of local language can be very challenging! This is especially so when you travel in Japan where most locals do not speak English. Although Japanese people, in general, do not expect foreigners to speak Japanese, they will be so pleased and impressed when they see you trying to communicate in Japanese. Hence, your Japanese knowledge will help you communicate with the locals. Plus, your experience will be richer and you will gain greater insights into the Japanese culture.

In this Survival Japanese blog, I will provide some useful tips for travelers who will visit Japan for the first time. This article is about how to travel by train once you land in Japan. I also include a section of Japanese lessons where you get to learn useful Japanese expressions while traveling by train.

Once you fly into Tokyo (Haneda), one of the five major international airports in Japan, the first challenge will be taking transportation to your destination. You have several options such as taking a taxi, airport limousine, bus, or Tokyo Mono-rail. Trains (Keikyu line), however, would be the most convenient and economical way to travel.

Japan has a world-class train system. They rarely get delayed. Passengers expect trains to be on time all the time, too! In order to maintain this level of punctuality, there is a great pressure on the train company. 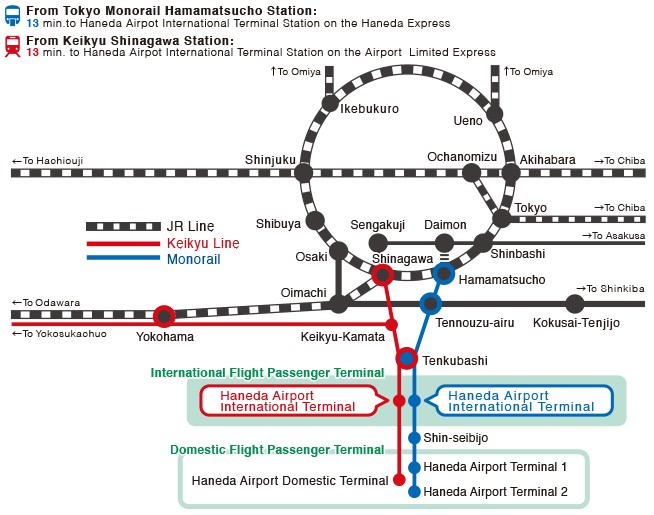 Before getting on the train, you need to buy an E-money card (just like Myki in Melbourne or Opal in Sydney). It is called “Suica” in the Tokyo metropolitan and north-eastern regions. Other regions have different names for their E-money cards, but they are usable nationwide. “Suica” is rechargable at shops or stations for use on public transport including trains, buses, and some taxis with “suica” stickers. You can also use suica to buy drinks onboard trains or from vending machines, rent coin lockers, as well as make purchases at convenience stores and restaurants. You can buy “Suica” at any JR railway stations. By the way, “Suica” means watermelon in Japanese. That is why the card is green. 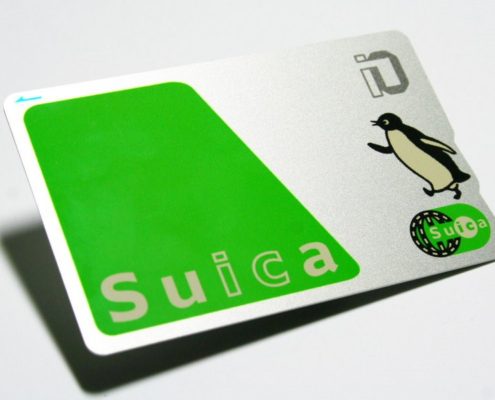 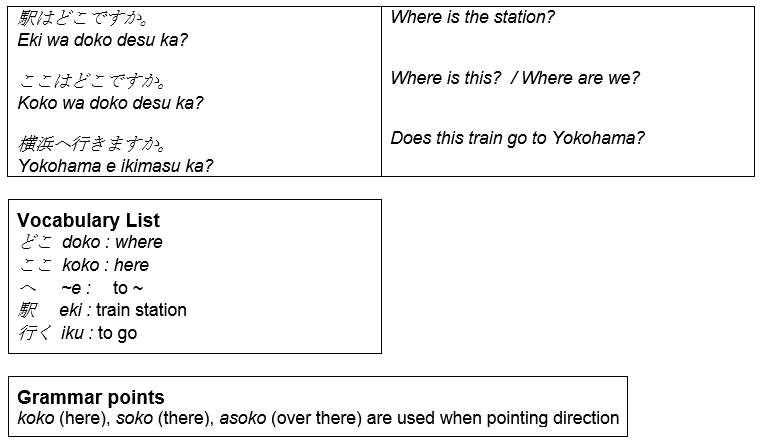 ② Getting Information at the station

On the train or at the station, you may be perplexed unless you understand the announcement or what people are talking about. These phrases will be useful to know: 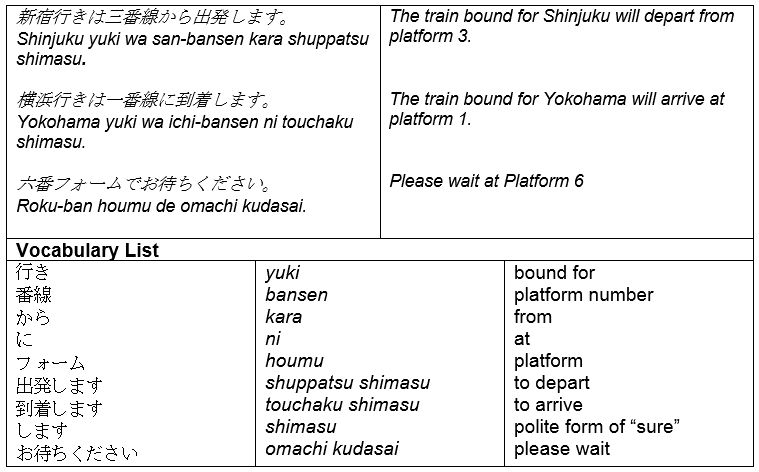 Some interesting facts about Japanese trains

Lastly, here is a quiz to test yourself on how much you know about Japanese trains.

You can find the answers below. 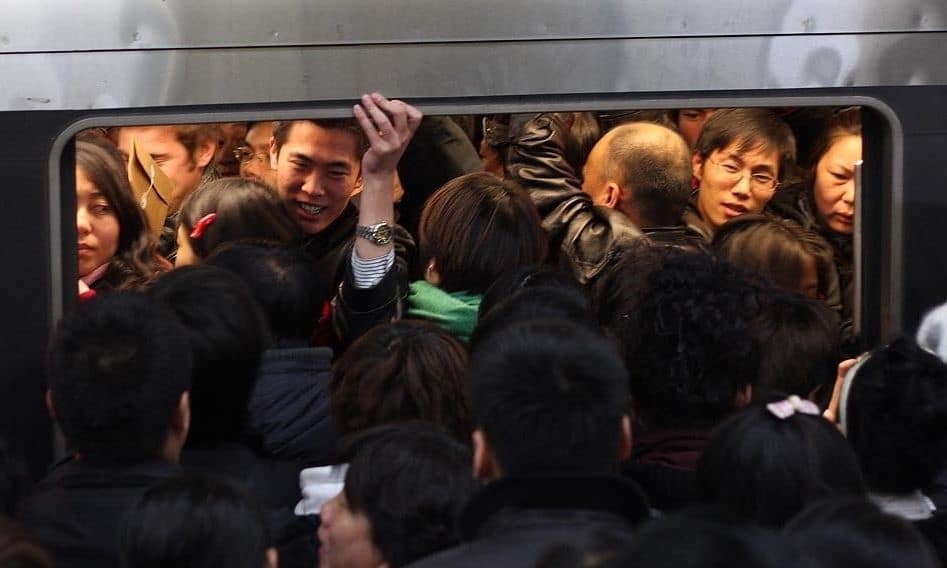 “Man-in Densha” is a jam packed train (click on the image above to see the video). I would advise you to avoid travelling during the rush hour on weekdays. The average ride rates on Man-in densha during rush hour is reported to be 164 percent. It has also been said that Keihin touhoku line from Ueno to Okachimachi (in Tokyo) between 8:00 a.m. to 9:00a.m. records 200 % ride rates! (I am actually not sure how bad this number means, but it is probably just like the picture above)

There is an expression “sushi-zume” in Japanese (equivalent to “packed like sardines”), which describes the layers of fish and salt packed in a container in order to make pickled fish for sushi. If you like the idea of becoming like pickled fish, getting on Man-in Densha can be an interesting experience! 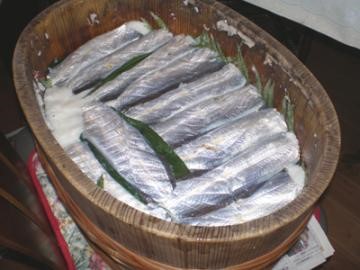 The majority of trains are air-conditioned during summer. I would always carry long-sleeved tops to put on in the train as you might catch cold in the air-conditioned trains. If the train is too cold, you can move to another car marked “Jyaku- reibousya (Mild Air-Conditioned Car)”, which is set to a higher temperature. Some train lines in the metropolitan area have started to introduce English signs for this type of train, but they are not on all of them yet.  So it will be useful to remember the character “弱” (symbolises a double bow with decorations, meaning “bending” and “delicate”). 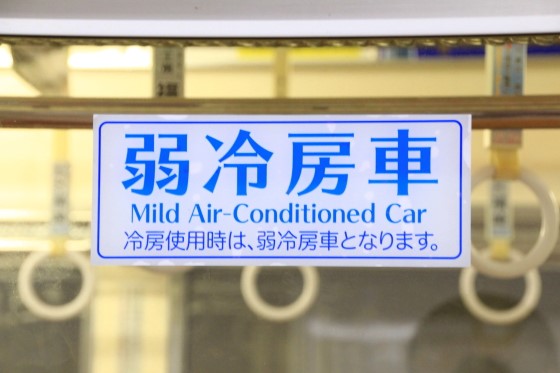 That is all for traveling by train in Japan. Stay tuned for more useful articles to learn about Japanese language, culture, and local tips in the Survival Japanese series.