A Guide In Using Movies To Learn Japanese

Keeping up motivation is the second biggest challenge when learning a foreign language (the first is not having enough time). Studies have shown that watching movies in the target language can sustain and even increase language learner’s motivation. Since the use of movies provides visual exposure that encourages cross-modal sensory learning, it helps make learning more memorable and lead to long-term retention. As such, how should one make use of movies to learn Japanese?

Understanding a movie requires 95% of vocabulary coverage, otherwise learner could be discouraged. For English program, this is the equivalent of 3000 word-families. No similar study for Japanese program is known to date. Choosing the right genre is important.  As drama tends to use more simple vocabularies than animation or action movies, it is better to watch this type of genre to ease comprehension.

3. Watch one to three Japanese movie(s) a week

To really benefit from incidental vocabulary learning through movies, Japanese learners should watch at least one Japanese movie weekly aside from their regular Japanese lessons, with three movies a week being optimal. This will increase learner’s encounter with new vocabularies learnt and sustained exposure acts as a reinforcement to memory retention. Alternatively, learners can watch the same movie several times to learn new vocabularies. Also, try to switch between using subtitles and without.

4. Understand what the movie is about prior to watching

Having some understanding on what the movie is about prior to watching will help learner’s comprehension. It is best to watch a movie that matches learner’s interest.

5. Teacher can teach key vocabularies prior to watching the movie

If movies are going to be used for teaching in a Japanese class, language teacher can provide learners with key vocabularies for the movie to reduce learner’s burden of comprehension.

Watching Japanese movies can enhance learners’ vocabulary gain, among other benefits. Learning by observing and imitating is a powerful learning mechanism. Studies show that imitation accelerates learning as it saves time for individual discovery or trial-and-error. Learners can mimic native speaker’s accent through movies, learn how to use words appropriately, as well as learn the body language of the target language. Not only that, learners can also increase their awareness of the Japanese culture and improve their listening skills by familiarising themselves with how different people speak. 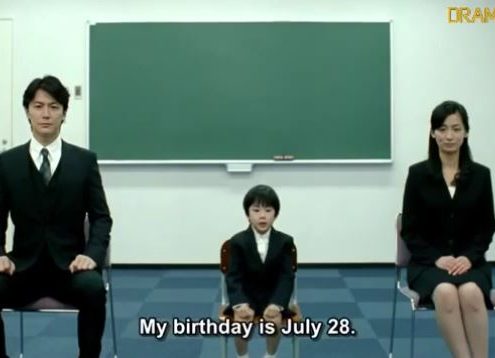 Ryota and Midori are a successful young couple who live with their six year old son Keita. One day they receive information from the hospital that Keita is not their biological son. The hospital has made a mistake. Ryota and Midori arrange a meeting with the other couple who raise their biological son, Ryusei. After several months of outings, Ryota is resolute that Keita is far from him in terms of appearance and personality and the family will be better off exchanging sons. However, Ryusei does not adapt well to his new family and runs away. Meanwhile, Ryota and Midori make more effort to bond with their biological son, only to learn that Ryusei just wants to return to his former home. Later, Midori confesses to Ryota that she too wants her family as before with Keita.

Shall we ダンス? (Shall We Dance) 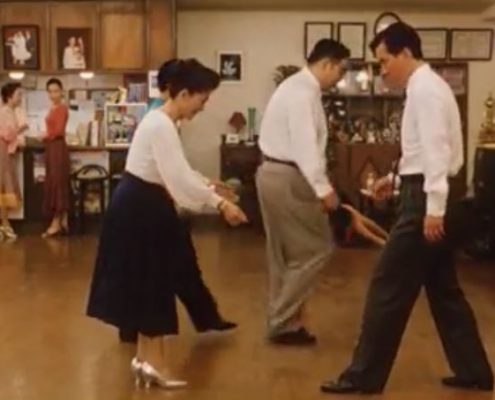 Shohei Sugiyama is a successful middle-aged salaryman whose life is losing direction. One night on his way home on the subway, he spots Mai Kishikawa staring out of her dance studio. Intrigued, he decides to enrol in her dance class. His infatuation with Mai grows as the dance lessons continue, so is his passion for ballroom dancing, which he must hide from his wife and colleagues as the activity conflicts with his stature socially and professionally. 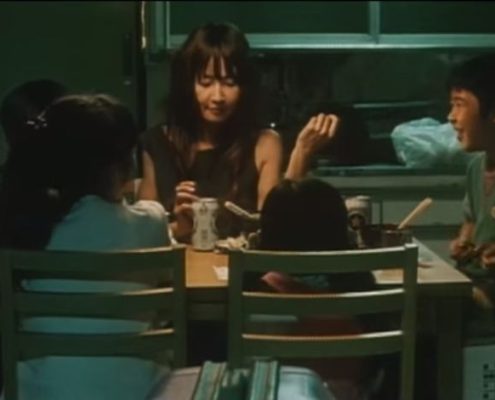 The story is based on a true event of four abandoned children. They are half-siblings to each other. Akira, the oldest, is twelve years old. They do not go to school and the three younger kids are unknown to the landlord. One day, their mother leaves them for good. The children are forced to fend for themselves. 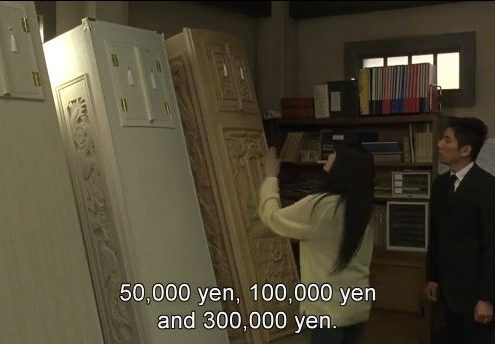 Daigo is a cellist who is forced to return to his hometown after a failed career. He finds work as a mortician, a profession that is ostracised socially. His wife and classmate urge him to find another job, but he persists in his current role and finds pride in doing it. Eventually, he earns the respect of those around him. 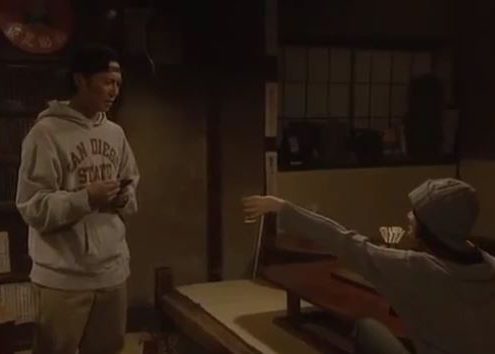 Hide meets Yuki when he is 19 and she 27. They become lovers. But one day Yuki tells Hide that she is getting married. This leaves Hide devastated, gradually turning him into an alcoholic. Although he finishes college and gains employment, his alcoholism has worsened, causing him to lose his job and turn him against his family. One night, while sleeping on a bench, he meets Yuki’s dog who leads him back to the restaurant where they first met. Hide goes into rehab and gets his life back on track. After 10 years, Hide finally meets Yuki again. It turns out that Yuki lies to him and is never married.

岸辺の旅 (Journey To The Shore) 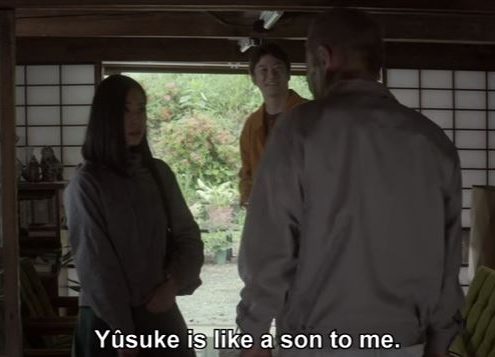 Mizuki’s husband, Yusuke, died three years ago. One night, Yusuke suddenly appears at home. Mizuki is not surprised, even when Yusuke declares to her that he is dead. Instead, she offers him mochi dessert she makes earlier during the day. Yusuke takes her on a journey to visit other people who have encountered the after-life realm, that sort of serves as their honeymoon and a ritual to close his unfinished business as well as hers. 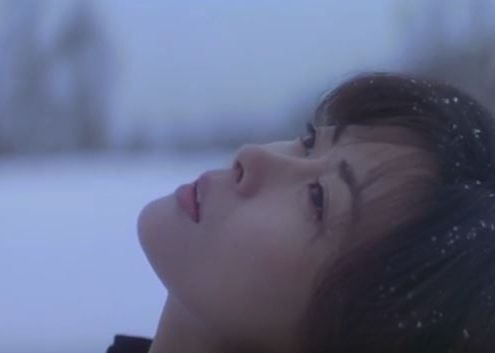 Hugely popular in Asia, this film tells the story of Hiroki who finds the memory of her deceased fiancé through his former classmate who also shares his name, Itsuki Fujii. After the memorial of her fiancé, she flicks through his high school photo album and decides to write him a letter sent to his past address. To her surprise, she receives a letter back. At first, she thought it was from her fiancé. Later, she discovers it comes from a woman with a similar name. They become pen pals. Through Itsuki’s stories, Hiroki learns more about her fiancé, and that she and the female Itsuki share a striking resemblance. She wonders if he likes her because she looks like the Itsuki from his high school. 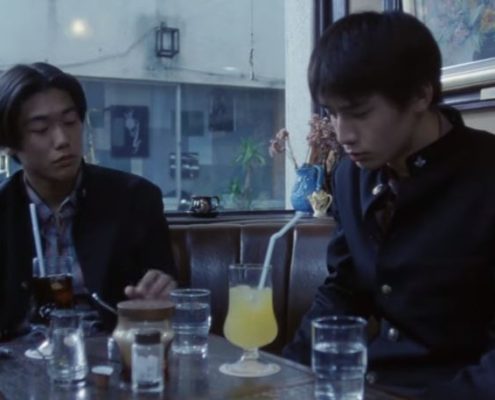 Shinji and Masaru are two high school best friends. They are troublemakers at school and both drop out. Masaru takes Shinji to his boxing club. When he discovers than Shinji is a better boxer than him, Masaru quits boxing and joins the mafia. In a few years, both have achieved success in their career. However, at the peak of Shinji’s boxing career, an older boxer let him astray, introducing him to alcohol and drugs that eventually destroys his boxing career. Meanwhile, Masaru does not fare better either. Due to his misdemeanour to an elderly mafia family, he is punished and cast out.

See also How To Eat Like A Local In Japan.

LEARN JAPANESE ONLINE
Survival Japanese: How To Eat Like A Local In Japan